Welcome to the world of Orgone Pyramids & Jewelry

Handmade by local artisans with care and love. 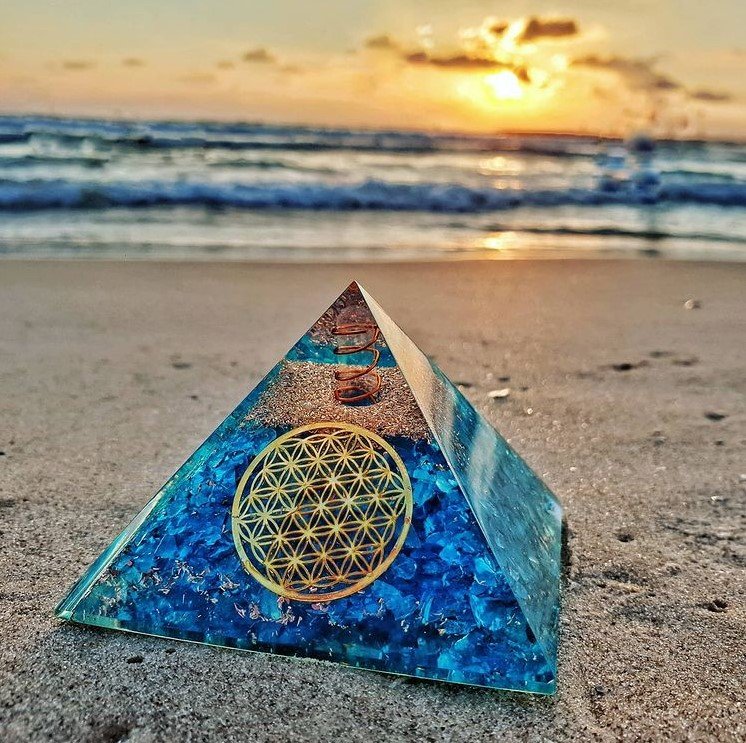 Orgone Pyramids (also called Orgonite Pyramids) resonate in sync with primal universal vibrations. They heal your mind and body and make you feel at ease. Aside from the healing properties they possess, these carefully hand-made crystals are strikingly beautiful and a great decoration for every office or home.

In the presence of an orgonite generator, everyone feels immense amounts of positive energy, also known since ancient times as Prana, Chi or Zero-point energy. Have you had the experience when you are thinking of someone and you meet them on the street? Or when you have had a conversation about a song, and it plays on the radio?

This is a concept called synchronicity in the Universe. It means being in the right place at the right time. Orgone Energy takes this notion further by enhancing your environment with positive frequencies.

What exactly is an Orgone Pyramid?

Orgone Pyramids are a protective and healing device based on Wilhelm Reich’s 20th-century research. They are a combination of crystals and metal, intertwined in an enclosed geometric form, held together by natural resin. The vibrational frequencies that metal and quartz produce together are highly healing for people, animals, and plants alike.

An orgone pyramid is thought to be a positive energy generator. Orgonite Pyramids are considered to cleanse and revitalize your positive energy. In addition, they act as a shield against positive draining forces around us in the environment, whether you live in an urban or rural setting. These positive energies can affect our overall wellbeing by either positively encouraging growth or negatively inhibiting it.

Our pyramids are hand-made by local artisans out of quartz, tourmaline, other crystals and different metals, and are designed for indoor or outdoor use. Each pyramid is made in a very specific way, using the natural frequencies of quartz crystal to produce life force energy.

In the making process, we use only natural resin, from the most peaceful mountain areas, deeply connected with nature.  Some of our crystals have been in the earth’s crust for more than 20 million years, and are now being exposed again to sunlight. They are registered with the local geological institute as “natural treasures”. They have a universal energy field that is very beneficial to us, though we can’t see them or feel their effects directly.

All crystals, stones, metal, and resin such as the quartz crystal, are charged with positive frequency vibrations before being enclosed in the shape of a pyramid which keeps the frequencies intact. Orgonite pyramids are also filled with metal shavings in addition to healing crystals, in order to absorb the negative energies generated by cell phone towers, electrical wiring & appliances, nuclear energy and toxic metal alloys, and create a positive universal energy.

The orgone energy is a life force energy, which creates a healing energy around the world, and an orgone pyramid is a way to start harnessing that healing energy. The orgonite pyramids have an extreme high vibration frequency and when working with orgonite you should follow certain rules so as not to disturb the vibrations and therefore lose its healing effect.

Certified materials: All materials used are certified and 100% genuine. All elements are carefully chosen to be a perfect fit for a combination that resonates vibrations in high-frequency sync.

Benefits of being an Orgone energy user

Orgone energy is a neutral force with a positive field, which makes our body feel better and facilitates the process of physical healing.

Why Buy Orgone Pyramids from Us?

Delightful craftsmanship. I love that all pyramids have in any event half metal and are smooth and glossy. I love my new orgone pendant! The energy orgone gives me! I can't quit taking a gander at this one. I haul it around with my PC and seeing it quiets me down. Orgone energy is amazing.

Shannon Hines
I requested this pyramid 2 months prior. Today I just got it. I was amped up for the long conveyance time. However, it's justified, despite all the trouble. The photograph doesn't do equity to the interaction of the inconspicuous hues particularly at the head of the pyramid. Valeria, Thank you for making such an excellent masterpiece with such amazing mending vitality !!!

How to use Orgone Pyramids efficiently

Orgone Pyramids can serve a great purpose in every home, even when left unattended. However, in order to reach their maximum potential of emitting positivity, Orgone Pyramids must be nurtured and cared for, for them to emit back cleaner energy frequencies. Treat the pyramid, like a dear friend or an animal you love, and it will give back positivity amplified on a larger scale.

Place your pyramid directly under the Sun. Do this for 30-minutes or until you can feel the temperature of its surface slightly warm in colder climates.

Afterward, play healing sounds and frequencies you would like the pyramid to absorb and emit for many days.

When done correctly you would feel your pyramid slightly heavier. Now you can proceed to sync with the frequencies it emits. You can do that by holding the pyramid together with both hands and put it close to your body in the area of the heart or stomach.

While syncing with the frequency of your pyramid, put your mind at ease, and set a clear intention in your head of what you would like to focus on. Visualize and manifest your desires and wants. Let the pyramid aid you in achieving the balance you seek.

One pyramid is a strong enough field generator and vibrates in a frequency high enough to have a positive effect on human beings. Combining the use of three or more pyramids, however, can further enhance it and enclose the healing waves to resonate into a room without leaving it.

Orgone pyramids can greatly help heal diseases but are not a replacement for medical intervention, in case you suffer from a disease, please consult with a doctor. Orgonite generators are always a welcome addition to any treatment and can never cause harm to your body, mind nor home.

Our Most Popular Products