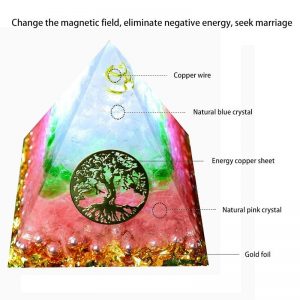 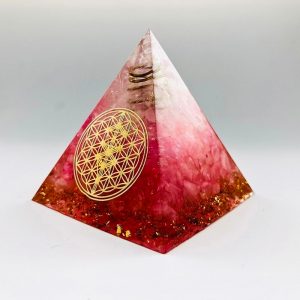 Disclaimer: The Natural stones used in the Orgone Pyramid have different patterns, shapes and color may vary slightly because the Pyramid is handmade.

This beautiful Orgone Pyramid was created with the use of numerous semi-precious crystals like Sodalite, Labradorite, and Quartz. To further enhance the healing frequencies they vibrate together in Gold Plated Brass and Copper coils were added.

The green dot stone is a stone of inner peace and can calm even the most restless of minds. It is smooth to the touch and beautiful from all sides. It is also often referred to as a worry stone.

Over the course of a monk’s life, an indentation in their worry storm would be formed one way or another and that is known to mean that they have achieved enlightenment.

Healing frequency 528hz. This beautiful necklace has been charged with the famous Solfeggio frequency which resonates at a high 528hz vibration. It is known to have a deep-rooted relationship with humankind, nature, and is deeply rooted in everything from animal cells to human DNA. Water, Oxygen, and Chlorophyll also carry the resonating electrons of the 528 Hz frequency, proving how close it is to everything connected to life itself.